The acrobat stands barefoot on the stage, his hard flesh exposed to the crowd. Even the smiling showgirl standing beside him in stiletto heels is more covered up in her flamboyant costume garnished with feathers.

The acrobat lies on his back. He inhales as he brings both his legs over his head. He exhales as he bends his legs and places both knees underneath his shoulders. He breathes steadily as he takes hold of his left foot with both hands, rotates his left hip slightly, lifts his head, and places his left leg behind his neck. He works it down behind his neck, toward the back of his right shoulder.

He now takes his right foot with both hands and, rotating his right hip slightly, brings it behind his neck and over the top of his left foot, interlocking them by the ankles and pointing his toes. The showgirl produces a length of rope which she wraps around the acrobat’s ankles, locking them in place behind his head.

He lifts his chest up between his legs as he rests his head on his feet. He looks up and breathes smoothly and deeply for twenty to thirty breaths. 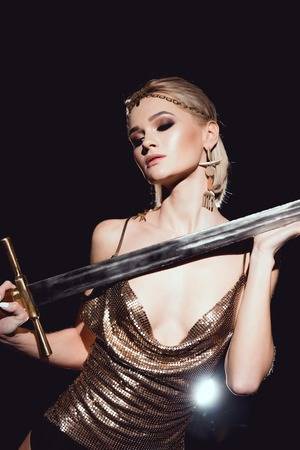 Kept in this pose by the locks on his wrists and ankles, his partner forcefully tips his head way back with her index finger, hyperextending his neck to straighten his pharynx. This is in preparation for the next part of the trick, for which the woman produces a menacing sword which is long and sharp. The helpless male acrobat is fed the deadly blade by the showgirl.

The acrobat must then move his tongue out of the way and consciously relax his throat as he “swallows” - not an easy thing to do because of our involuntary gag reflex, the body’s defense mechanism against swallowing foreign objects - the sword. There are nerve endings lining the back of the throat that can detect any intrusive, non-chewed-food objects, generating nerve impulses which neurons carry to the brain stem. The brain responds by using motor neurons to instruct the throat muscles to contract. The end result if he is not careful: he can retch, sometimes vomiting, as his body attempts to force the unwanted object out of his throat and mouth.

As the woman slowly inches the blade down his throat, the sword straightens out the curve of his esophagus and nudges certain organs out of the way.

The instrument enters his mouth and pharynx, then his esophagus, traverses the cardiac end of his stomach, and enters the latter as far as the antrum of the pylorus, the small cul de sac of his stomach. In their normal state in the adult these organs are not in a straight line, but are so placed by the passage of the sword through his bound body. In the first place, his head is thrown back, so that the mouth is in the direction of the esophagus, the curves of which disappear or become less as the sword proceeds; the angle that the esophagus makes with his stomach is obliterated, and finally his stomach is distended in the vertical diameter and its internal curve disappears, thus permitting the blade to traverse the greater diameter of his stomach.

Throughout this process, the acrobat’s life seemingly lies in the hands of the showgirl who carefully guides the sharp blade down her partner’s soft throat.

To those schooled in human anatomy, however, it is clear that the bound acrobat must concentrate. He must keep his back and neck straight at the expense of putting all the pressure on his hips to avoid the sword down his throat slicing up his insides. The acrobat has no choice but to endure the painful bend and hope that the showgirl’s hands are steady. A single tear streams down his face as he suffers the painful pose.

Soon, the entire blade disappears into his body, helplessly bound by rope and his own twisted limbs, until only the curved hilt rests outside his lips. The crowd has been silent to this point, transfixed by the scene and not daring to make any sudden noises lest the performers become distracted with disastrous consequences for the acrobat. When the showgirl walks to the side - her high heels clacking on the rough stone floor where he lay wiggling his toes- and removes the cloth covering with a flourish to reveal a set of four more swords for the acrobat to swallow, the crowd gasps.

At the end of the act, the showgirl has reshaped the acrobat into a living, breathing scabbard.